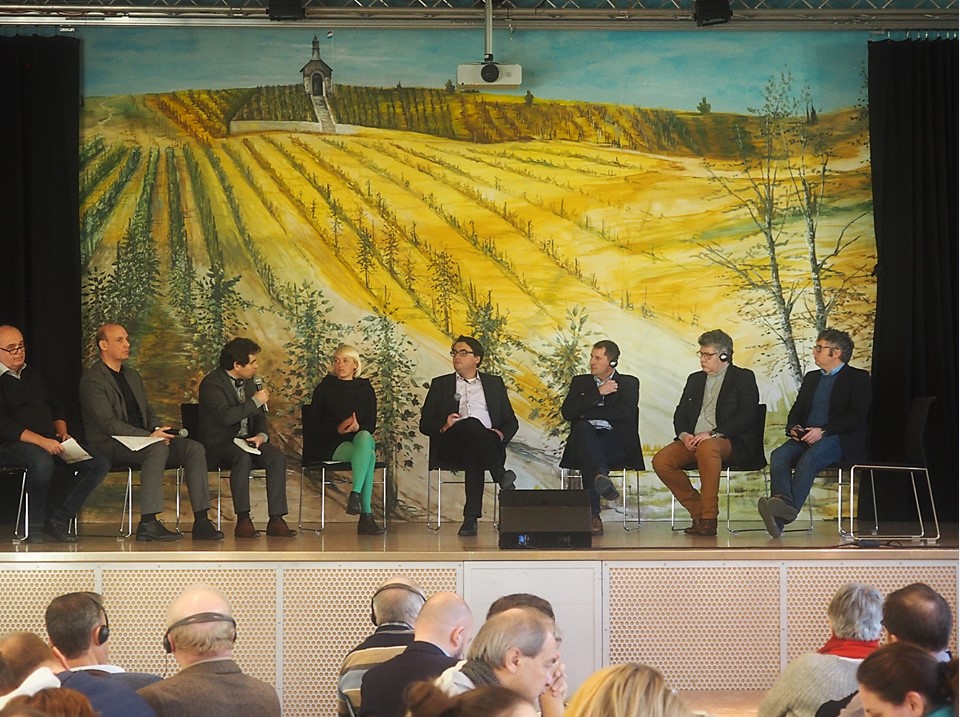 Clim4Vitis at the 12th annual winegrower meeting in Wormeldange, Luxembourg

On February 5, 2020, a panel discussion on the topic “Climate change – How can we adapt?” took place during the 12th annual winegrower meeting in the town hall of Wormeldange in Luxembourg. Jürgen Junk and Daniel Molitor representing LIST and project Clim4Vitis were invited to participate in that discussion.

Due to the emerging number of extreme events, especially heatwaves and summer droughts in the last decade, the discussion evolved around the question how to provide sufficient water for the Luxembourgish vineyards in the future. Increasing the water-retaining organic carbon content of the soil, irrigation based on rainwater as well as on water from the river Mosel were discussed as potential adaptation strategies. Legal aspects of water acquisition in France, Luxembourg and Germany were compared. More than 150 wine growers, consultants, retailers, politicians and researchers joined the event that was organised by the Institut Viti-vinicole and the Fédération des Associations Viticoles.

Clim4Vitis project has received funding from the European Union’s Horizon 2020 Research and Innovation programme, under the Grant Agreement number 810176. This website reflects only the author’s view and the Commission is not responsible for any use that maybe made of the information it contains.

This website uses cookies to improve your experience while you navigate through the website. Out of these, the cookies that are categorized as necessary are stored on your browser as they are essential for the working of basic functionalities of the website. We also use third-party cookies that help us analyze and understand how you use this website. These cookies will be stored in your browser only with your consent. You also have the option to opt-out of these cookies. But opting out of some of these cookies may affect your browsing experience.
Necessary Always Enabled

Any cookies that may not be particularly necessary for the website to function and is used specifically to collect user personal data via analytics, ads, other embedded contents are termed as non-necessary cookies. It is mandatory to procure user consent prior to running these cookies on your website.